I think most of us are pretty comfortable with the fact that when we have an allergy, histamine is the primary culprit that causes our eyes and skin to itch. This little protein molecule is stored primarily in Mast Cells and when released (through degranulation) can signal an inflammatory response and itching. Histamine is found almost everywhere in the body and is particularly abundant in tissue prone to injury like our extremities and blood vessels.

We have antibodies in our system called immunoglobulin E (IgE) that are released in response to an invading pathogen like a virus or bacteria, pollen or when responding to an injury caused by toxins (think about your itchy mosquito bites). The IgE then causes the flood of histamine in the area. The reaction of histamine depends on the receptor it binds.

There are 4 different histamine receptors in our body conveniently numbered 1 through 4. (Don’t you love when scientists keep things simple and straightforward and don’t add to the complication by coming up with names that only Dr. Seuess could make up?) The H1 receptors are primarily found in the capillaries, which allows the capillaries to become more permeable and can make the area appear puffy. The H1 receptor also works on smooth muscle contraction, primarily in the digestive and bronchial muscles, which presents as breathing and stomach issues. When you take an OTC or prescription antihistamine like diphenhydramine or chlorpheniramine, the target receptor is H1. The H2 receptors cause an increased secretion of hydrochloric acid in the stomach. There can also be a slight increase in vasodilation, but slower than the H1 receptors. H2 stimulation may also inhibit the release of prolactin. Most of the H2 blockers are used for acid reflux and are available as OTC items, like cimetidine, famotidine, ranitidine, nizantidine. We also have H3 and H4 receptors. The H3 receptors will reduce histamine release in the central nervous system (CNS) and in the periphery. We do not have any drugs developed that affect this receptor, but researchers suspect that H3 inhibition may be useful in certain neuropsychiatric conditions. The H4 receptors seem to have some involvement in immune reactions, but further research is required. 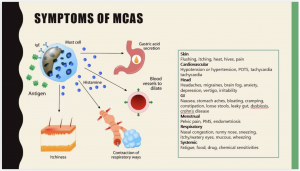 Now I have painted a picture that makes histamine out to be a pretty good villain. But like some of our favorite villains they can also have a good side – many are just a little reluctant to show it. Histamine can also act as a neurotransmitter in our brain. This can increase and decrease the other neurotransmitters like norepinephrine, serotonin, dopamine and acetylcholine. Histamine is also important in controlling our sleep-wake cycle. It may decrease GABA levels and increase norepinephrine and epinephrine levels. Histamine is also noted to influence neuroendocrine control including behavioral state, biological rhythms, energy metabolism, thermoregulation, fluid balance, stress and reproduction. Elevated histamine may affect thyroid function. Histamine may play a role in neurocognitive function as well. (Haas, 2008) Histamine also reduces the seizure activity in humans and animals that have an increased number of H1 receptors in some types of human epileptic foci. Histamine has also been found to contribute to the physiological control of appetite. (Hough, 1999) So we don’t want to completely get rid of the villain, not only does our story become pretty boring but we also miss out on the benefits.

How does our body control histamine? It is broken down through either oxidative deamination or N-methylation. There are enzymes that control the breakdown of histamine in different areas of the body. In the gut, our body makes an enzyme called Diamine Oxidase (DAO). The job of DAO is to break down the histamine and keep it from binding to too many of the receptors. If your body doesn’t make enough DAO or it can’t keep up with the demand after eating something that causes a food allergy, there are OTC products that contain DAO to help counter the histaminic allergic reaction. Our body typically limits DAO to our gut. The enzyme that processes the N-methylation is N-methyltransferase. There are some self-help strategies to support and improve your body’s methylation process. Diet: eliminate sugar and alcohol and packaged/processed foods. Sleep: your body needs that time to rest and restore. Stress reduction: the methylation cycle is very sensitive to stress, take the questionnaire on Dr Wilson’s Adrenal Fatigue site. Add a good B Complex and minerals: this provides the nutrients needed for the enzymes to work, the cofactors to support the methylation cycle and the methyl groups to methylate the histamine. Plus a good B complex can give you a nice boost of energy, just remember to take it with food.

What about keeping the histamine from being released from the mast cells? We have medications for that too! These are called Mast Cell Stabilizers. There are several drugs that can be used systemically: cromolyn sodium, ketotifen and tranilast. There are other medications that are more localized treatments for the eye and sinus areas. There are also several natural supplements that can be very effective. There is a lot of attention and research on quercetin and vitamin C. There is no issue with using these together. Just make sure you get a quality professional supplement! Curcumin is another natural supplement, but this isn’t as universal as the quercitin and vitamin C. Some people find that curcumin makes the histamine problem worse instead of better.

Most of us will have the temporary discomfort of seasonal allergies or a particular food or foods that cause us some reaction and can be dealt with on a seasonal or occasional basis. If you are one that eats a low histamine diet and avoids your triggers but still has lots of issues, know there are people out there that will help you. As with all medical conditions, it is important to find the right practitioner who can help figure out a treatment plan for your Histamine Intolerance (HIT) or Mast Cell Activation Syndrome (MCAS). ISEAI is a wonderful source to search for a practitioner to guide you through finding answers and living your life to its fullest.

*All rights reserved to Mixtures Pharmacy and Lori Allen, RPh.

Closed on Monday 7/4/2022 to honor our Independence. Have a safe and healthy holiday.